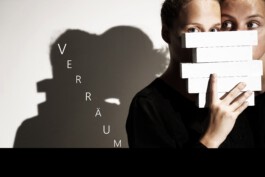 How can we experience chaos and order through the body? How do we influence our bodies with order and chaos? How do we distinguish between these two at all, or why do we perceive something as chaotic or ordered? Where do we impose order on a chaotic system in order to be able to understand it? Where are there hidden orders? What influence do chaos and order have in nature and how does this affect human experience? Is order perhaps only repetition?

The first production of wirbeide dealt with order and chaos. We developed a space that is both a stage and an installation. In constant, randomly controlled change, the arrangement poses questions about our own patterns of order and the point at which chaos begins. Already in Genesis, chaos is described as "desolate emptiness", the beginning of everything, and so we also see it as the origin, the beginning, the end and at the same time the transition of every order. With a mixture of installation, dance and performance, we approach these questions, let structures emerge and disintegrate again, expose ourselves to the unpredictable and see what happens. We want to wait until the order breaks down of its own accord and watch what new emerges in the space, with and in us and all those present.

Supported by the Sparkassenstipendium der Domäne/Kulturcampus Hildesheim and the ASTA of the University of Hildesheim, the production was developed in two phases. In a first 3-week rehearsal phase in Berlin, in cooperation with the Jugentheateretage of the Kunsthaus e.V., a version was created, which was then further worked on in a second rehearsal phase in Hildesheim and premiered there on 16 and 17 December 2016. Verräumt' was performed on 30 March 2017 at the BANDEN! Festival of performative alliances by the Staatstheater Oldenburg. 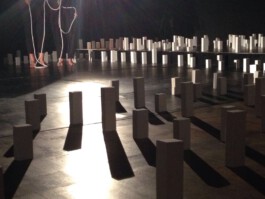